“I see what you’ve done. Now see what I’ve done. I’ve opened a door before you that no one can slam shut. You don’t have much strength, I know that; you used what you had to keep my Word. You didn’t deny me when times were rough.

“And watch as I take those who call themselves true believers but are nothing of the kind, pretenders whose true membership is in the club of Satan—watch as I strip off their pretensions and they’re forced to acknowledge it’s you that I’ve loved.

“Because you kept my Word in passionate patience, I’ll keep you safe in the time of testing that will be here soon, and all over the earth, every man, woman, and child put to the test.

“I’m on my way; I’ll be there soon. Keep a tight grip on what you have so no one distracts you and steals your crown.

When we are children we often have comforting images we return to again and again. In my case one of these images was a door in a wall. Through this door was a garden and if I could only find it then I could go through this door and enter the garden where nothing bad could happen. Of course, as I grew up this image became tinged with sadness. In the godless world I lived in then, this door could never exist.

Before I started the book club I spoke to a number of (adult) people about their favourite books. This book, The Last Battle, by C. S. Lewis came up again and again. Having read it again, I wonder if it is that image of a door into a perfect world that means so much to so many people. Yet it is a world full of paradoxes. The first is that you must step into the darkness to find the light. Lewis describes the moment Tirian (the Narnian King) steps over the threshold into the stable. He expects to find a dark place inhabited by Tash, the dark god. Instead:

For a moment or two Tirian did not know where he was or even who he was. Then he steadied himself, blinked and looked around. It was not dark inside the Stable, as he had expected. He was in strong light: that was why he was blinking.

In the bright world Tash is there. But he only wants to overcome the Calormene leader, who has summoned him. Soon, Tirian sees another sight.

Seven Kings and Queens stood before him, all with crowns on their heads and all in glittering clothes, but the Kings wore fine mail as well and had their swords drawn in their hands.

These people are the humans who have made their way into Narnia from our own world. But there is one missing…

The rest of the book is really an allegory or fable. Is it of Heaven? Is it of a New Earth, renewed in the image of Heaven? I don’t know and I’m not sure it really matters. Maybe we could go one step further and say it is a picture of the Kingdom of God here, now, on Earth, in our own lives and hearts. 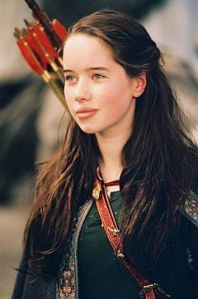 But, Tirian asks: ‘Where is Queen Susan?’

“My sister Susan,” answered Peter shortly and gravely, “is no longer a friend of Narnia.”

“Yes,” said Eustace, “and whenever you’ve tried to get her to come and talk about Narnia or do anything about Narnia, she says ‘What wonderful memories you have! Fancy your still thinking about all those funny games we used to play when we were children.'”

“Oh, Susan!” said Jill. “She’s interested in nothing nowadays except nylons and lipstick and invitations. She always was a jolly sight too keen on being grown up.”

So Susan is excluded from the New Narnia. And what is her terrible crime? She is the sceptic, the one who embraces the ‘real’ world. She has forgotten the wonder of the walk through the snowy forest and the awe of meeting Aslan. The everyday god of social acceptance has become more important. What she no longer believes in she cannot have.

But the next thing the Narnians find is that some people have arrived the New Narnia who don’t believe in Aslan. They find the dwarves sitting in a circle, unable to see the beautiful land and only seeing the dark and smelly stable. Even Aslan cannot help them. He gives them fine food and it tastes like raw turnips. Fine wine tastes like smelly water;

But very soon every Dwarf began suspecting that every other dwarf had found something nicer than he had, and they started grabbing and snatching, and went to quarrelling, till in a few minutes there was a free fight and all the good food was smeared on their faces and clothes or trodden under foot.

But when at last they sat down to nurse their black eyes and their bleeding noses, they all said: “Well, at any rate there’s no Humbug here. We haven’t let anyone take us in. The Dwarfs are for the Dwarfs.”

“You see,” said Aslan. “They will not let us help them. They have chosen cunning instead of belief. Their prison is in their own minds, yet they are in that prison; and so afraid of being taken in that they cannot be taken out. But come, children. I have other work to do.”

The problem is that the Dwarfs have been taken in. Night after night they had bowed down to a donkey in a lion skin. They had been told this was Aslan and, for a while, had believed it. They had done what this false god had asked them to do. So, when he was shown to be a fraud. They refused to believe in anything except themselves and, perhaps, each other.

In our godless world this is what we call ‘growing up’. In the last ten years or so I’ve met a lot of teenagers. They all believe in something. It may be a boy band or a football team. It could be their own dreams or ambitions. Yet all of these things will fail. The boy band or football team will, after all, be just young men who can falter. Even if the dreams are realised they will not change who we are, or chase the shadows away. So these youngsters will leave behind the gods that failed them, get a job and a mortgage and just well, carry on.

Before we reach the end I want to look at another character in this story. The Last Battle was published in 1956. To modern minds it has some very non-PC characteristics. One of these is that the baddies (called Calormenes) are clearly of middle Eastern origin. They are quite bloodthirsty and have an unpleasant, devil like, god. But Lewis makes the point that, even in such a rotten barrel, there will be one or two good apples. Emeth resolves to walk into the stable to find his god ‘to look apon the face of Tash though he should slay me’. But once he walks through the door he finds himself in the wide, beautiful, New Narnia and comes face to face with Aslan.

“Then I fell at his feet and thought, Surely this is the hour of death, for the Lion (who is worthy of all honour) will know that I have served Tash all my days and not him. Nevertheless, it is better to see the Lion and die than to be Tisroc of the world and live and not to have seen him. But the Glorious One bent down his golden head and touched my forehead with his tongue and said, ‘Son, thou art welcome.’ But I said, ‘Alas Lord, I am no son of thine but the servant of Tash.’ He answered, ‘Child, All the service thou has done to Tash, I account as service done to me.’…

But I also said (for the truth constrained me), ‘Yet I have been seeking Tash all my days.’ ‘Beloved,’ said the Glorious One, ‘Unless thy desire had been for me thou woudst not have sought so long and so truly. For all find what they truly seek.’

So Emeth the Calormene joins all the other humans, talking animals and other creatures as they go ‘further up and further in’. They go through another door into an even wider and more beautiful place. But I won’t tell you how it ends, you will have to read the story yourself.