A few months ago a friend of mine asked a question I struggled to answer. The question was ‘Why bother with Apologetics?’ . My answer is in this post.

On Saturday morning I had an hour to kill in Guildford. So I spent it walking around Stoke Park and considering how to make Christian Apologetics real to my readers. I also spent time looking at the park, the trees, the people walking and running on the grass and the Cathedral on the hill in the distance. Then I thought about the way I see the world. Full of meaning and promise. Full of pattern and the joy of God’s creation around us. I love science so my view includes that too.

Then I thought – How would a true atheist see this scene? Very differently I think. In the pictures below I’ve tried to capture this.

Every year the BBC puts on a series of Christmas lectures aimed at young people interested in science. In one of these Richard Dawkins said the following:

The universe is nothing but a collection of atoms in motion, human beings are simply machines for propagating DNA, and the propagation of DNA is a self sustaining process. It is every living object’s sole reason for living.

And that is it really. We live, apparently, in a world stripped of meaning. The grass, so carefully mowed to a huge lawn, is no more than self replicating small plants. The trees are just large plants which have a utility of keeping oxygen in our atmosphere. The cathedral is a completely pointless building built by delusional human beings who choose to believe in an imaginary ‘Sky God’.

And what about the young woman walking across the grass? I don’t know who she is or why she was there but Francis Crick (one of the discoverers of DNA) has something to say to her:

You, your joys and your sorrows, your memories and ambitions, your sense of personal identity and free will, are in fact no more than the behaviour of a vast assembly of nerve cells and their associated molecules.

Which is pretty bleak. But I can hear my friend saying: ‘Does it really matter what a few academic scientists say?’. I’ll come back to that. But first I want to present the picture again. 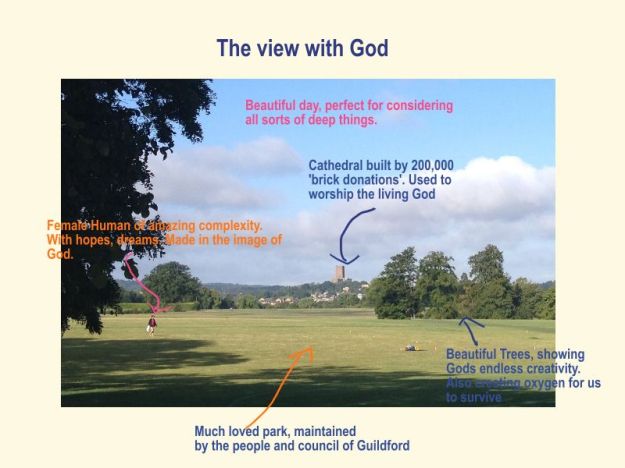 Its the same scene but understood completely differently. The trees are still using photosynthesis to survive and produce oxygen but they also create amazing patterns of light and colour, each one perfect and unique.

The young woman walking across the park still has DNA (which she may or may not use to replicate in other human beings), her brain is still made of nerve cells but she is able to grow and change and become so much more than just a human animal.

And the whole morning was so perfect: cool, bright and peaceful. There were quite a lot of people in the park: walking, running, chatting. It was as though God had packaged the whole thing up and offered it as a gift, perfect at that moment.

Before I get back to my friend’s question I want to talk about the Cathedral. I have to admit I knew very little about Guildford Cathedral before I wrote this post but I did a bit of research and discovered its remarkable history. The building was started in 1936 but was interrupted by the war. After the war there was very little money to complete it so a campaign was started to buy a brick. Each brick cost 2s 6d (12 1/2pence) and 200,000 of these were bought by all sorts of people, including the Queen but also including people who had very little to spare. The church was finally finished in 1961 and is a vibrant and living part of the community.

So, why does it matter when a group of Atheist academics declare that God doesn’t exist? It matters because it has become part of our culture here in the UK. Every culture has a source of information that people go to for their views on the world. In this country a large part of that role is taken up by TV stations but especially the BBC. I cannot remember ever seeing a program on the BBC that shows modern Christianity in a realistic, positive light. The only regular Christian program is ‘Songs of Praise’ which shows a soft focus, artificial image of Church which would certainly not tempt me to go. This leads to some curious ideas. Matthew Parris in the Times (25th June 2014) declared:

Most modern Christians and Jews, we surmised, don’t really believe their religions

As though this was the most self evident truth, not even worth discussing (this was especially unsettling as Matthew Parris is a writer I generally read and admire)

So we have a generation, with no church background, who are being told that faith in God is either an effect of belonging to a cultural minority or a kind of weak delusion that no sensible person should contemplate. Of course, thank God, there are some people, like myself and many of my family and friends, who manage to break through this barrier but many do not. And what are they left with? At best a faith in family and friends (which is not a bad thing, but can other human beings bear that weight alone?) or a muddled ideal of ‘self realisation’, or they are left with the first picture: that there is only matter, only ‘stuff’ and nothing else.

I’ve quoted a lot of people who don’t believe in Jesus but I want to wrap up with the immortal (well they have lasted almost 2,000 years without loosing any of their potency) words of St Paul:

We don’t yet see things clearly. We’re squinting in a fog, peering through a mist. But it won’t be long before the weather clears and the sun shines bright! We’ll see it all then, see it all as clearly as God sees us, knowing him directly just as he knows us!

But for right now, until that completeness, we have three things to do to lead us toward that consummation: Trust steadily in God, hope unswervingly, love extravagantly. And the best of the three is love.

In a world without God there is not a lot of trust in anything. The faith my parents had in progress and technology has proved a dead end. Nothing has sprung up to take its place.

Hope is too often replaced with the contents of a bottle or a packet of pills. Hope dies early in many people’s lives, once the first dream bubble has burst.

And love. We all, Christians and non-Christians, need to love and be loved. But the difference is that we know we are loved by God and that makes it easier to love other people. We can love them as the frail, imperfect human beings that they (and we) are, without expecting them to make our own life perfect.

So: Why bother with Apologetics? The Greek word ‘Apologia’ means defence and we need to learn to defend our faith against the attacks on it. We are not alone and, in academic circles, it seems the tide is turning against the New Atheist thinking. But it is a battle that will not be won until ordinary people know they are truly free to come and learn about Jesus.

The atheist quotes are taken from:

God’s Undertaker. Has science buried God? by John C Lennox. This is a brilliant book defending Christianity against the New Atheist, scientific thinking.

The Bible quote is from ‘The Message’ version translated by Eugene H. Peterson

If you are interested in a more theological defence against New Atheism then I would recommend:

The Dawkins letters – by David Robertson. He explains why he wrote this book in this short video